The Chronicles of Elyria project has been on a mission to deliver a new MMORPG to backers, with the project coming to a halt in April of this year. In a blog post by the project’s lead developer, it was revealed that the developer had been unable to deliver the game as promised in the original Kickstarter campaign. As a result, the developer proposed a class action waiver in which all backers would be given one month to opt in to the waiver. The response from backers has been overwhelmingly negative. In the following blog post, the community voiced their displeasure with the proposed class action waiver and asked for the developer to halt development and refund the entire Kickstarter.

This week backers ofChronicles of Elyria have been keeping an eye out for a new NDA that Soulbound Studios is asking them to sign before they can test the spin-off game Kingdoms of Elyria. That’s because there’s a clause in the NDA that essentially denies players the right to participate in a class action lawsuit. For example, the ones that already exist. Additionally, the participants must acknowledge that the studio is not obligated to release the game, which is also relevant to the lawsuit. A significant portion of the NDA reads as follows:

(iii) Although Soulbound Studios intends to release a commercial version of the Game, you acknowledge that Soulbound has no obligation to release the Game or any similar product.
(14) Limitation of Liability
(i) You AGREE that the liability of SOULBOUND STUDIOS, ITS AFFILIATES, OFFICIERS, EMPLOYEES, AGENTS, PARTNERS, REPRESENTATIVES, AND LICENSEES SHALL BE LIMITED TO THE MAXIMUM LIABILITY IN THEIR JURISDICTION.
(ii) Soulbound Studios shall not be liable for any damages under this Agreement that exceed $250.00 in the aggregate.
(15) Dispute Resolution
(i) Regulatory. This Agreement is made in the State of Washington and shall be construed and enforced in accordance with the applicable laws of the United States of America and the State of Washington without regard to its conflict of law rules.
(ii) Arbitration Agreement. ANY DISPUTE, CONTROVERSY OR CLAIM ARISING OUT OF OR RELATING TO THIS AGREEMENT SHALL BE FINALLY SETTLED BY ARBITRATION ADMINISTERED BY THE AMERICAN ARBITRATION ASSOCIATION (AAA) IN KING COUNTY, WASHINGTON, IN ACCORDANCE WITH THE LAWS OF THE STATE OF WASHINGTON OR THE FEDERAL LAWS OF THE UNITED STATES, WHICHEVER IS APPLICABLE, UNDER THE RULES OF THE AAA IN EFFECT AT THE TIME ARBITRATION IS REQUESTED, WHICH RULES ARE INCORPORATED BY REFERENCE INTO THIS AGREEMENT. THE ARBITRAL TRIBUNAL SHALL HAVE JURISDICTION OVER ANY MATTER WITHIN ITS OWN COMPETENCE OR OVER THE VALIDITY OR ENFORCEABILITY OF ANY PART OF THE ARBITRATION AGREEMENT. THE ARBITRATOR MAY AWARD INJUNCTIVE RELIEF, FINES AND OTHER RELIEFS. THE DECISION OF THE ARBITRATOR IS FINAL, CONCLUSIVE AND BINDING ON THE PARTIES TO THE ARBITRATION. THE JUDGMENT MAY BE ENTERED IN ANY COURT HAVING JURISDICTION. EACH PARTY’S PROMISE TO ARBITRATE CLAIMS IN ACCORDANCE WITH THIS AGREEMENT AND NOT IN COURT IS IN CONSIDERATION OF THE OTHER PARTY’S SIMILAR PROMISE. THIS ARBITRATION PROVISION SHALL SURVIVE TERMINATION OF THIS AGREEMENT.
(iii) Waiver of Collective Bargaining Claims THE PARTIES AGREE TO ARBITRATE ONLY ON AN INDIVIDUAL BASIS. THIS AGREEMENT DOES NOT AUTHORIZE COLLECTIVE ARBITRATION OR THE FILING OF CLAIMS AS A CLAIMANT OR COLLECTIVE MEMBER IN ANY COLLECTIVE OR REPRESENTATIVE ARBITRATION. THE ARBITRAL TRIBUNAL SHALL NOT COMBINE THE CLAIMS OF MORE THAN ONE PERSON OR INSTITUTE PROCEEDINGS THAT ARE REPRESENTATIVE OR BELONG TO A CLASS.
(iv) Waiver of jury trial. The parties waive the right to a jury trial in any proceeding arising out of or related to this Agreement.

We would like to point out here that it is not unusual for companies, even game studios, to include such language in their privacy agreements and terms of use. For example, Electronic Arts’ general terms and conditions (I pick at random) provide for similar arbitration agreements with customers. MMO players will recall that the lawsuit against Trion Worlds over ArcheAge , which was settled last year, concerned the wording of the lawsuit and arbitration. We are not saying that you should waive these rights, we are just pointing out that this is a fairly common practice for companies trying to protect themselves from consumers they have wronged.

But under these particular circumstances, and given that a class action lawsuit is already pending against this company and its original game on Kickstarter, you might want to think twice before buying a virtual pen. While stakeholders debate whether California case law on these arbitration clauses allows them to be applied to existing disputes, Discord , advises funders , not to sign the NDAs. 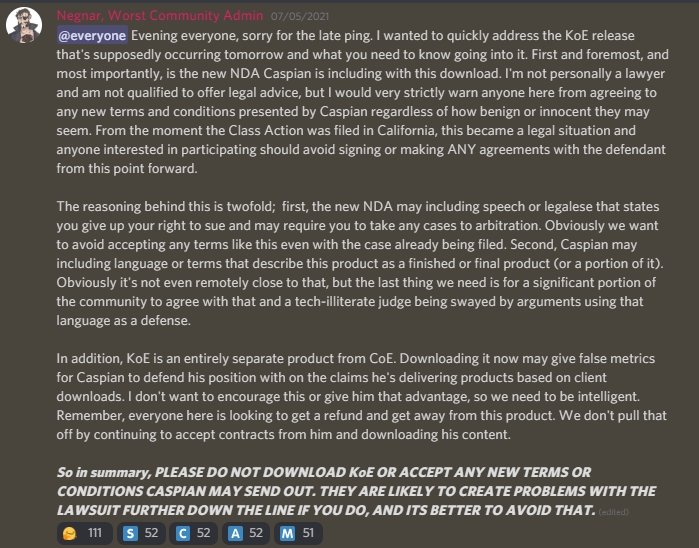 As previously reported, Soulbound abruptly announced the studio’s closure in 2020, laying off the team and halting development of Chronicles of Elyria due to lack of funding. CEO Jeromy Walsh later retracted much of his initial statement, saying instead that the game is still in production at volunteers. But backers who invested more than $14 million in the game via crowdfunding have filed a class-action lawsuit against Soulbound and payment system Xsolla. In 2021, the studio says that COE and its spin-off Kingdoms of Elyria are still in production. The lawsuit was filed last February and a few weeks ago the plaintiffs were still filing motions to have the case dismissed.