While Blizzard was busily patching Diablo 2 to address playability issues, they also quietly increased the maximum shared stash size from 50 to 2000 in response to online requests for more storage space. 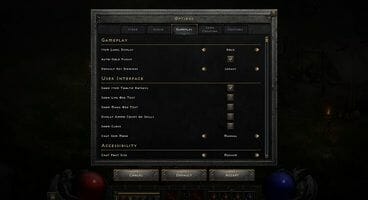 “After careful deliberation, the Shared Stash will now have three tabs, rather than just one. Many players felt one tab wasn’t enough,” reads a post on the developer’s website.

“When it comes to a player’s personal storage chest, we understand it’s serious business. This change will enable players to better organize their loot across three tabs (100 slots each) of storage space and store many more items.”

Blizzard has also noted that “characters will no longer spawn in a hostile place until the game is fully loaded,” which also removes the possibility of getting attacked and taking damage while you’re waiting for the loading screen to go away. Loading times should also be improved, according to the developer.

Player feedback following Diablo 2: Resurrected’s April technical test has also led to the addition of an in-game clock, clearer icons for gems, scrolls, and weapons that should also make it easy to differentiate between their different types, and more. You can check out the full list in the post linked above.

Diablo 2: Resurrected is due out on September 23.