Monster Hunter Rise | How to Find and Unlock All Sub-Camps

Monster Hunter is one of the biggest games on the planet, and the Monster Hunter series has been going strong for a few years now. The newest installment is Monster Hunter World, which takes place in a brand new setting called “Wyvern Woods”. The game offers a number of new monsters to hunt, including new bosses like the Zinogre, which is a monster designed to be difficult. In order to find and hunt these new monsters, you’ll have to head to “Sub-Camps”, which are smaller Monster Hunter worlds that have a certain monster as the main quest.

Monster Hunter is a multiplayer video game where players hunt and kill monsters and other players in order to get their loot and complete quests. Monster Hunter: World is the latest installment in the series and it’s coming to the PlayStation 4 and Xbox One in 2018. Naturally, more and more players are interested in how to unlock all the sub-camps in Monster Hunter World and how to get to them.

Subfields are an important part of Monster Hunter. Like the main camps, they offer you a place to rest and stock up on supplies while you hunt. They serve as the nearest convalescent home if you pass out, and as a quick travel point if you want to get to a certain part of the map quickly.

Unlike the main camps, however, the secondary camps are not available by default – you’ll have to find them and complete various quests to open them up for hunting. To help you out, we’ve put together this sub-camp guide, which will show you where to find all the sub-camps in Monster Hunter Rise, and which quests you need to complete to unlock them.

We begin our subfield guide with the Ruins of Sanctuary, the first area you can visit in Monster Hunter Rise. There is only one sub-camp in this area, ideally located on the other side of the map for quick travel. 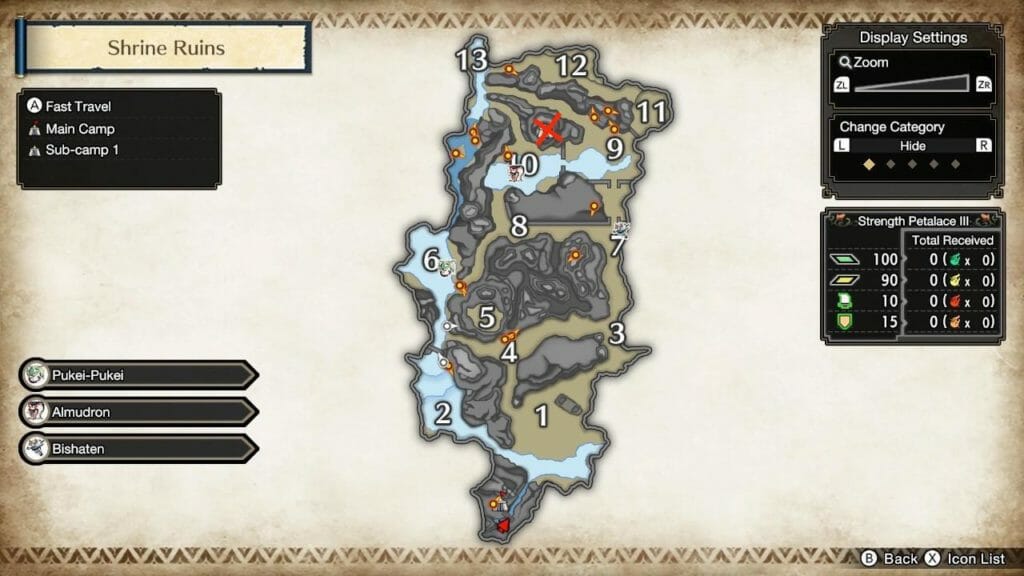 You’ll find the Sanctuary Ruins sub-camp in zone 10, north of the flooded area on the map. It’s on a nearby mountain, so you have to rely on bugging out and climbing walls to get there. Fortunately, there are a few small steps down the mountain that you can use to reduce your endurance.

Follow the path to area 13 and then climb the east ledge. Climb the next short ledge and then the wall on your right. Follow the bamboo candles on the path to the right where you will find a wall overgrown with lianas. Climbing up the lianas will take you directly to the second storage area. 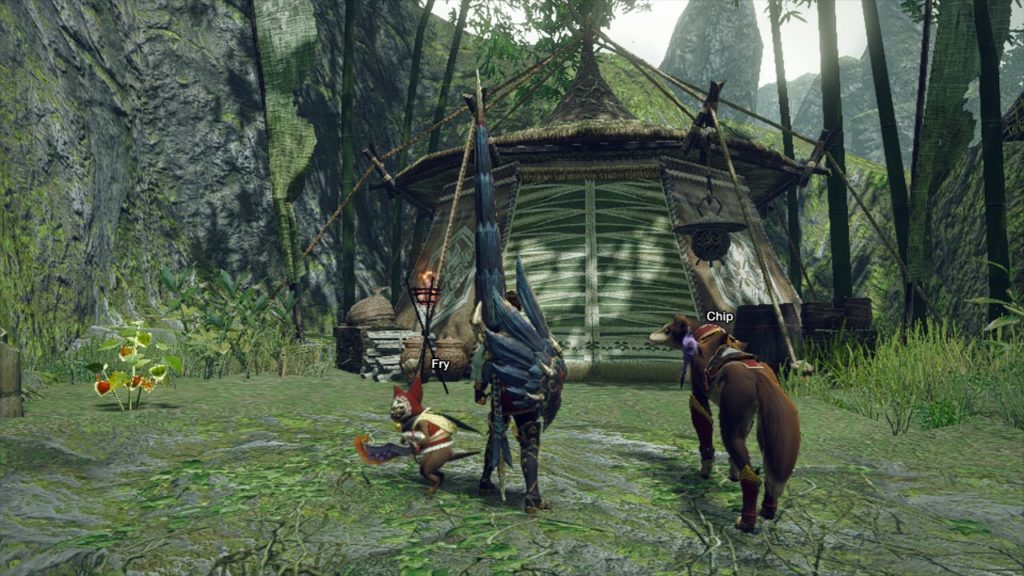 After you find the camp, talk to the merchant Kagero in Kamura Village to get the side quest Guarding the Shrine Ruin Subcamp, which requires you to kill eight Izuchi in the Shrine Ruin area. When you’re done with the monsters, report to Kagero and the side camp will be ready for you the next time you’re in the area.

Next on our sub-camp guide are the Frost Islands. There are two sub-fields on the Frost Islands, both located on the surface. This will be consistent across all areas of Monster Hunter Rise – you won’t find sublairs in the underground areas, so you won’t have to search everywhere like you did in Relic Records. 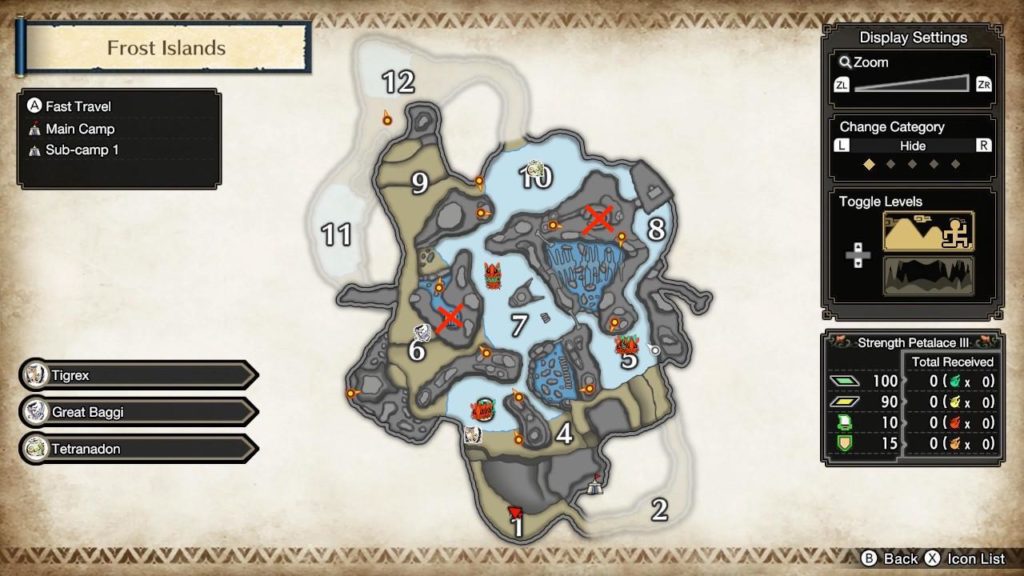 You will find the first subcamp in zone 6. There are several ways to get there, the easiest is to enter from the north side. Jump off the right side of the land bridge connecting areas 6 and 9, and you’ll be right in front of the tunnel leading to area 11. There’s a hole in the rock face nearby – it’s flanked by a few snow-covered rocks, but you’ll find it easier if you look at the blue mushroom growing nearby. Go through the hatch and you’re in the sub-store. 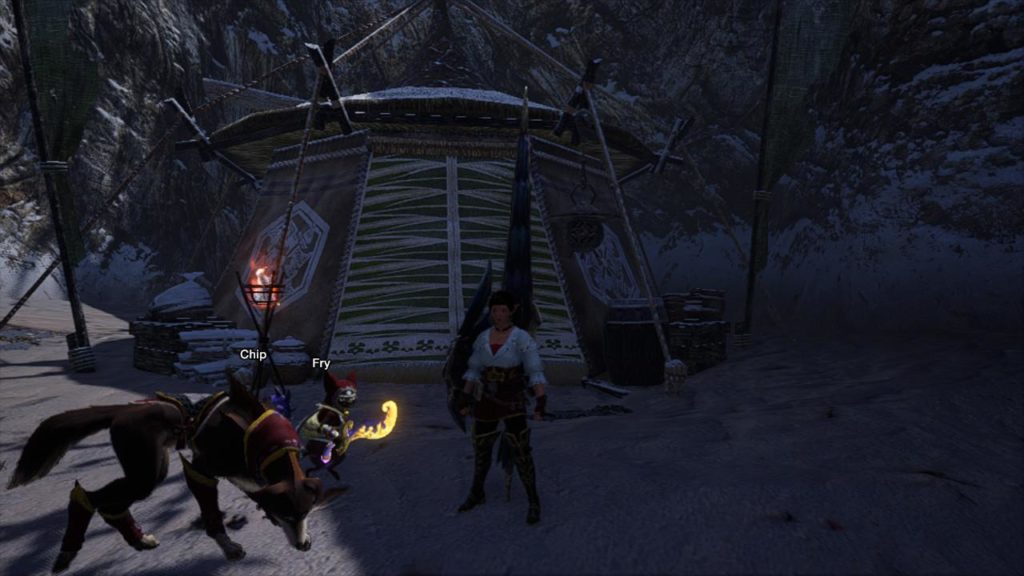 Another way to reach this subcamp will cost you a few big bugs, but is much more fun. From the main warehouse, go to area 1 and follow it to area 3. On the right, there is a group of Jewish lilies near a ledge – plant a Great Wirebug and navigate it to the next area. He’ll drop you off at the top of the rock pillar, and you can go straight ahead and enter the next spot with jeweled lilies. From here, use another Big Wire Bug, and you’ll find yourself in the middle of the Sub-camp.

Not shown: my misplaced grimace 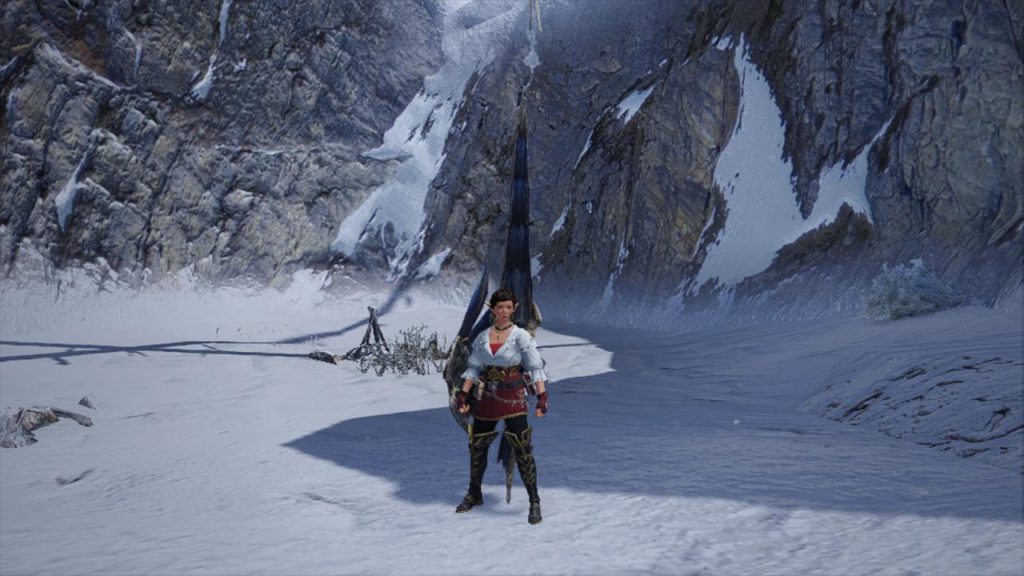 To unlock this subquest, you have to complete the Materials for Frost Island subquest. This is a delivery trip, and Kagero will ask you for two hot skins (regular Kelby and low ranked Antek skins, both found on the Frost Islands) and four sample S-Bones (found in the low ranked bone piles in each area). Deliver these items to Kagero to unlock the second shop.

Next up are the sandy plains, where you can find the game’s most annoying monsters. This applies to monsters both big and small – I’m not a big fan of Diablos, but nothing puts me in rage mode faster than when Renoplos decides to put a stop to it. Nevertheless, fast movement is necessary, which is why you will find subfields here. 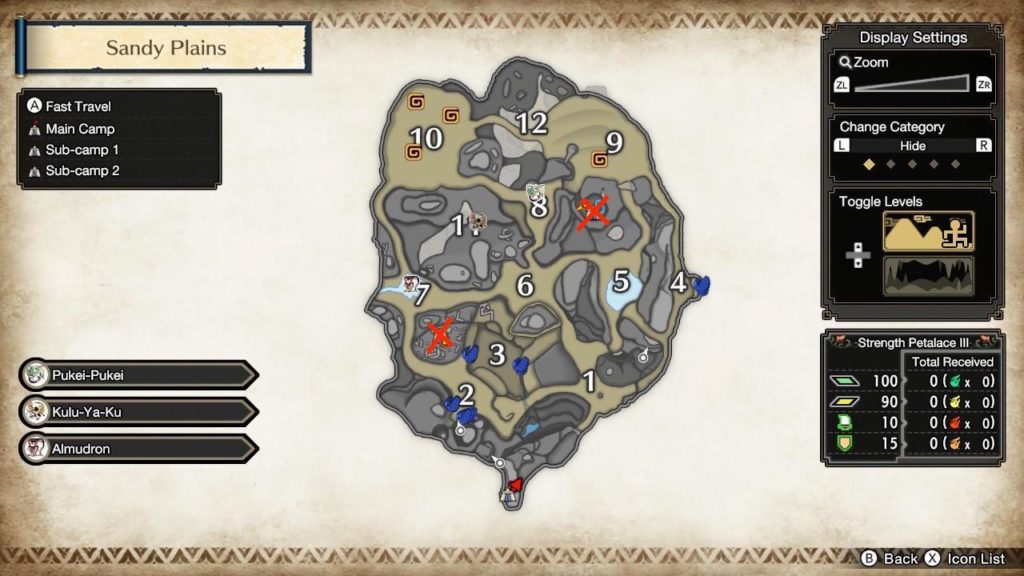 The first subcamp is located between sites 2 and 7, in the middle of the ruins. The ruins themselves are easy to see from anywhere, so you’ll have no trouble finding them. Go to the top of the hill, climb the wall and walk through the ruins until you come across a sub-camp. 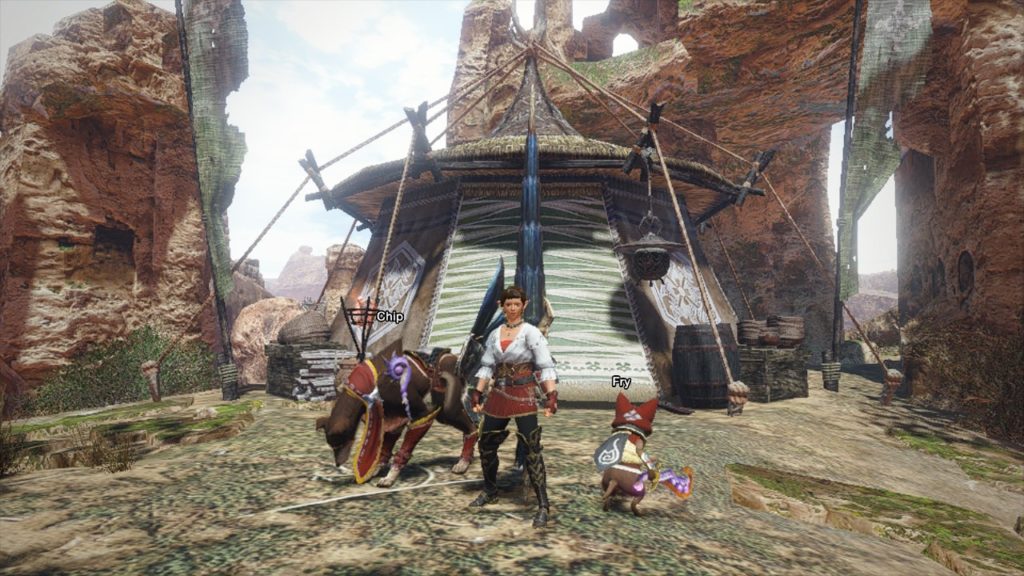 After that you can talk to Kagero to get the side quest Guarding the side camp in the sand plains. After killing eight Kestodons in the Sand Plains area, inform Kagero to unlock the sub-camp.

The second camp is located immediately east of zone 8. If you follow the path between sections 8 and 9, you’ll see a small opening in the south wall (Herb helpfully points out where to look). Go through the gorge to find a small oasis and a second sub-camp. 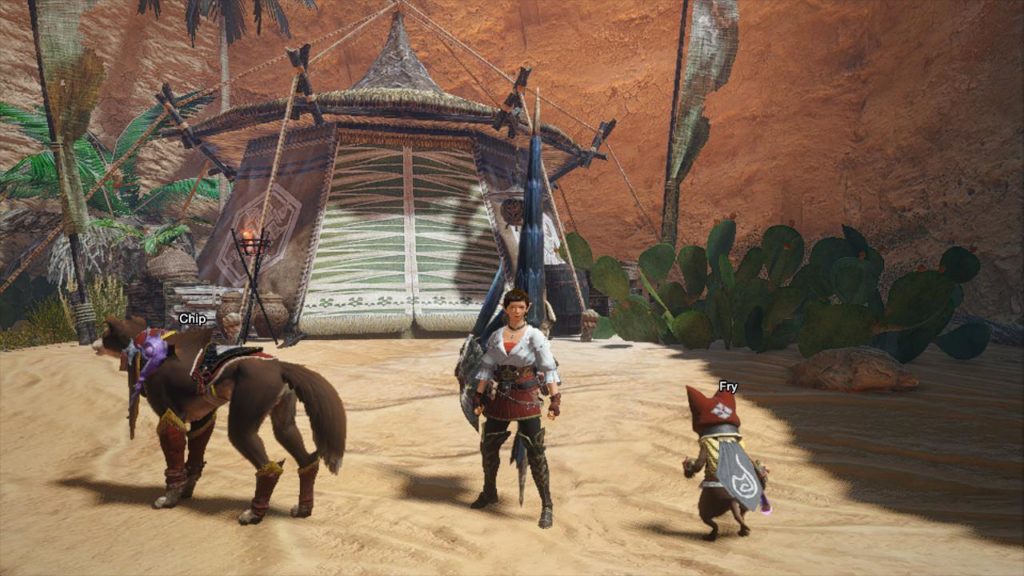 This sub-warehouse can be unlocked by another delivery. So accept the Materials side quest for the Kagero Sand Plains sub-store. For this item, you need a Lagombi skin (which you can get as a reward for killing or capturing a Lagombi of low rank) and two Monster M bones. You can check your Hunter’s Notes and select Great Monsters > Materials to see which monsters this item came from, but you’ll have better luck hunting the monsters in quest ★3. Report to Kagero when you have the stuff to clear the shop.

The flooded forest is another area in this guide with a sub-camp. I know the pyramid at the bottom right looks like a tempting place for a secret sub-camp, but it’s not there (it’s worth a look for some other treasures, though). 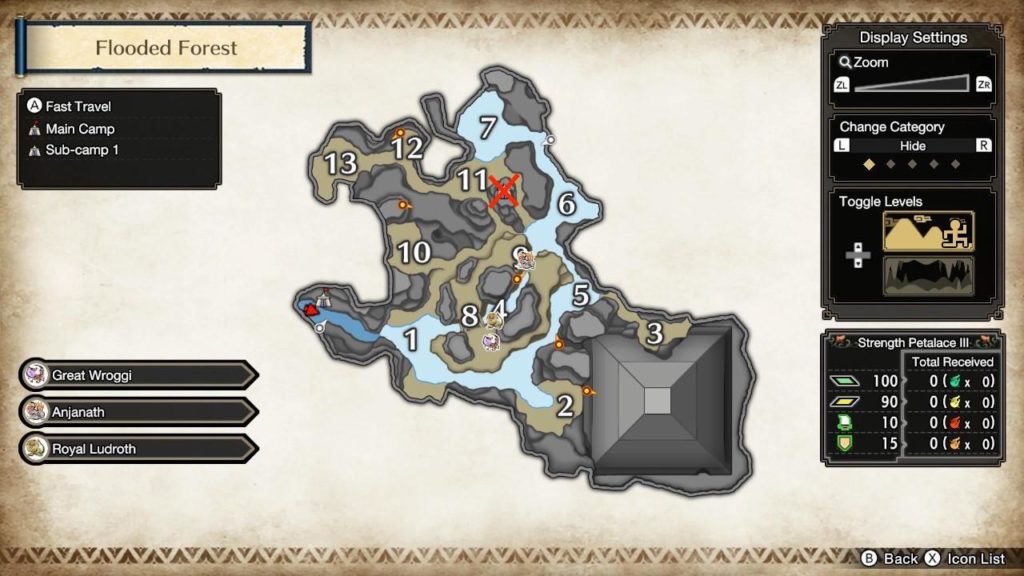 The subarea of flooded forest is located in zone 11. Take one of the trails that lead to area 6 or area 9 – it doesn’t matter which, because we’ll just climb the rock pillar that separates the two trails. The climb is easier if you approach it from the south side, as there are several shorter ledges. Climb to the level where the antidobra is hanging, then use the wall of vines to climb to the last ledge. Go through the opening in the wall to reach the second shop. 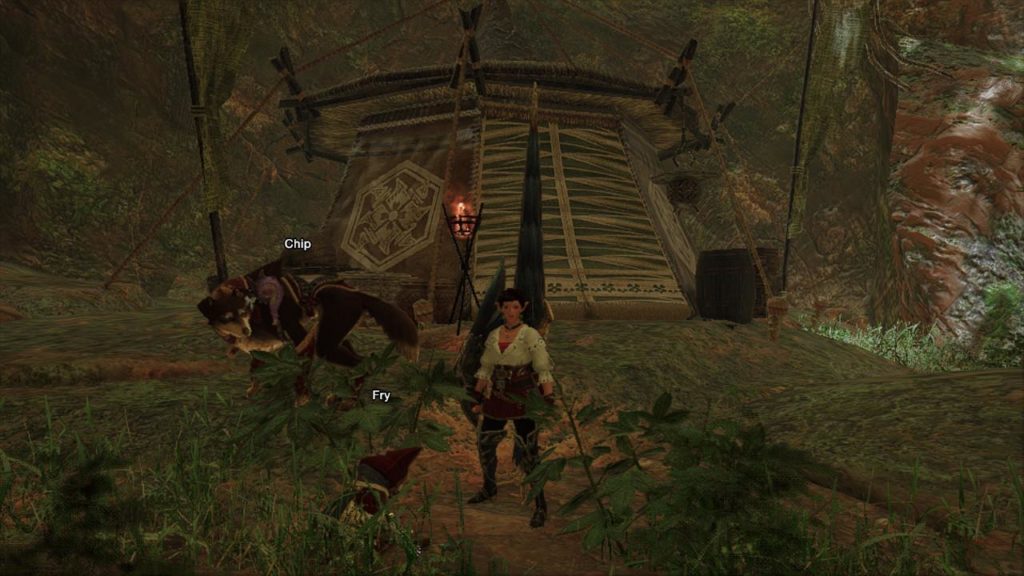 Last but not least: the lava caves. This area has a much larger underground area than the others, but don’t let that put you off – although the two sub-camps are on the upper level, they have easy access to the lower areas, so you can move around quickly. 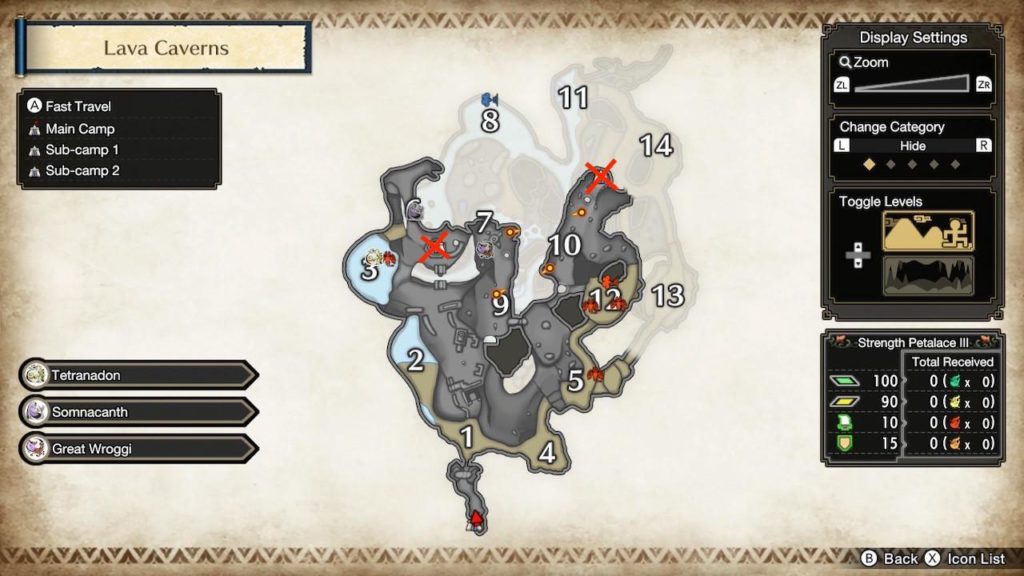 The first subfield in this section of the subfield guide is fairly easy to find. Go to area 12 and follow the stone path, making sure the lava flow is on your left. Eventually you will come to a dead end where the subcamp is located. 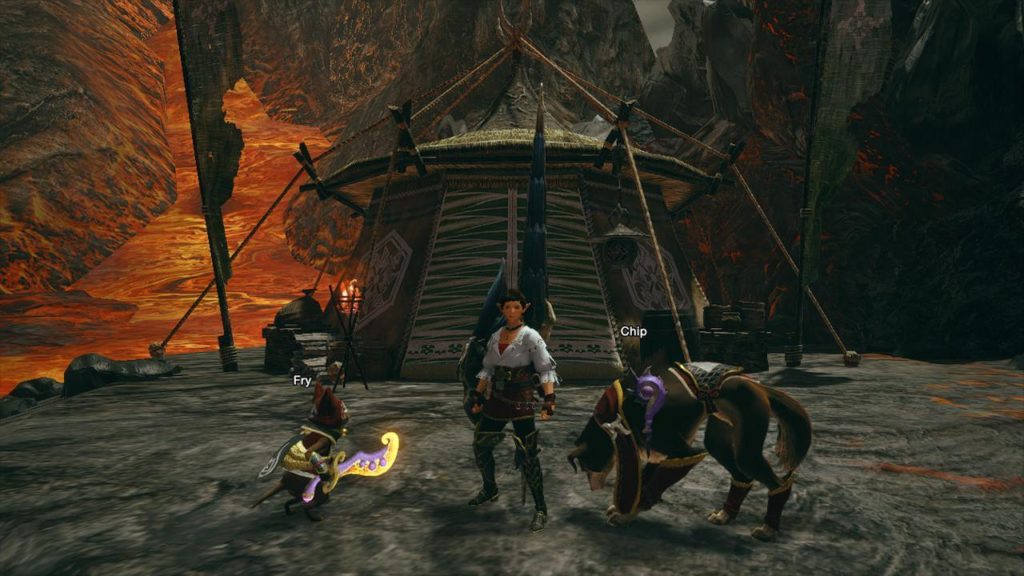 On the way up, you may have noticed a large hole in the ground. This is the fastest way to get to and from the underground area, and an easy way to find an underground camp if you haven’t already. If your hunt takes you to spot 11 or 14, head for a high rocky spot in between (you’ll know you’re in the right spot if you see a cluster of bushes and a few stray mosquitoes). Head south until you find Rising Wind – get carried away, then cross the wire on the north side to land right next to the camp.

She is beauty, she is grace, she will fall on her nose 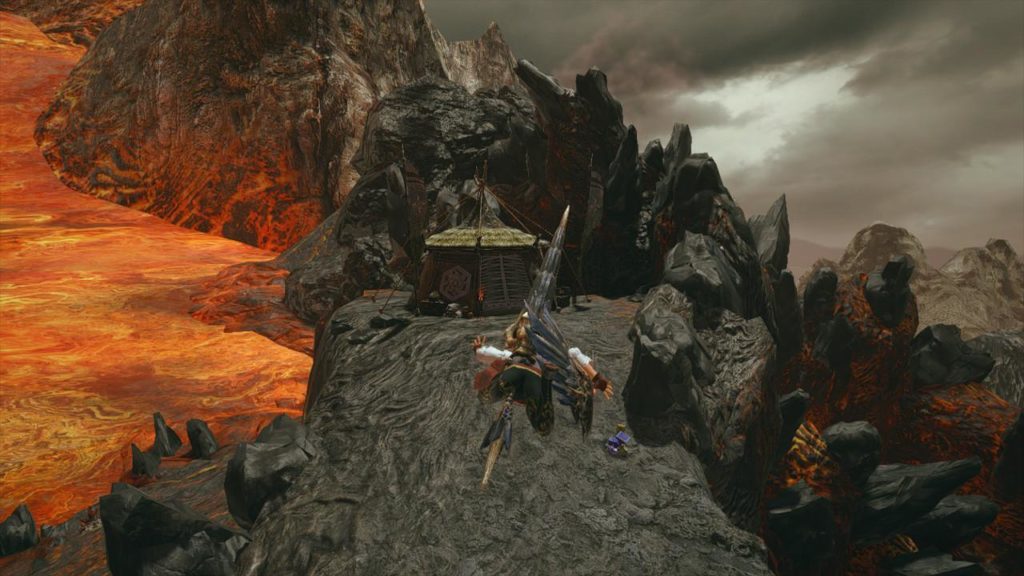 You know what to do: Talk to Kagero to get the order to guard the subcamp in the lava caves, then go back to the lava caves to kill eight Urutians. Complete the quest, and the side camp will be waiting for you the next time you are in the area.

The second subcamp is located in zone 6. Climb the short wall of tendrils in area 1 for the main camp, then head north until you find Felin’s camp. Continue left and follow the path across the land bridge where Honey will appear.  You will see what looks like the remains of a stone building, surrounded by some large trees. The subcamp is in this small area, so you can go right in to get to the clue.

Lower camp 2 of the lava caves 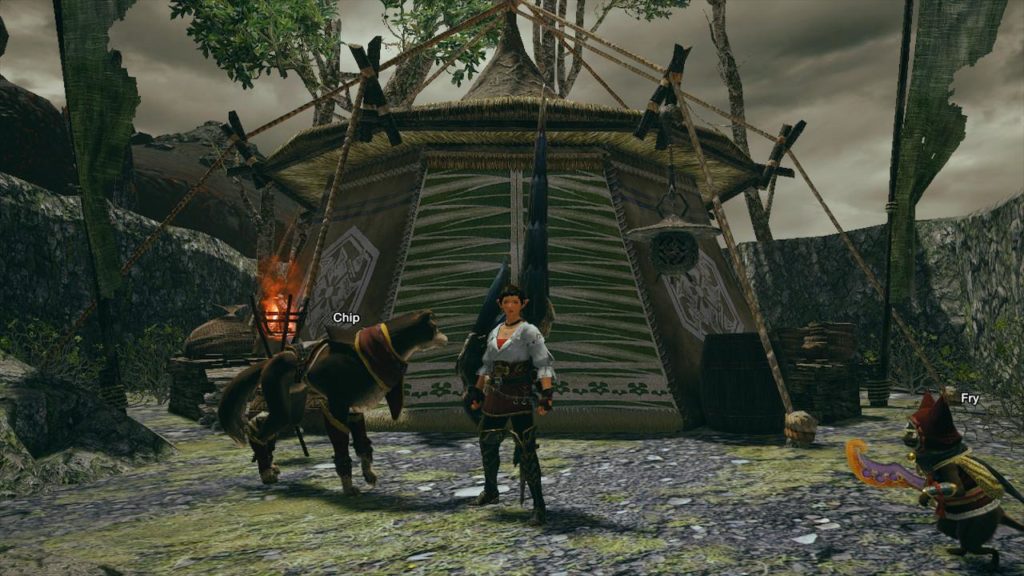 Go to Kagero to get the quest material for the Lava Cave subcamp, for which you need a Tetranon skin (obtained from a low ranked Tetranon) and 2 bones from L monsters. Again, check the hunter notes to see what kind of monsters can fall from this item, but hunting monsters with ★4 is pretty safe.

That’s it for our guide to Monster Hunter Rise subcamp – thanks for reading! We hope these sub-camps will make your hunting and your expeditions a little easier. Don’t forget to subscribe to our newsletter and follow us on social media for more Monster Hunter guides like this one.

Have fun searching!Monster Hunter is a series of video games that allow players to hunt monsters in an expansive open world. Players must upgrade their weapon, armor, and skills as they progress through the game in order to defeat tougher and tougher monsters.. Read more about monster hunter rise sub camps and let us know what you think.{“@context”:”https://schema.org”,”@type”:”FAQPage”,”mainEntity”:[{“@type”:”Question”,”name”:”How do you get all the sub camps in MH rise?”,”acceptedAnswer”:{“@type”:”Answer”,”text”:” You can’t.”}},{“@type”:”Question”,”name”:”How many sub camps are there in Monster Hunter rise?”,”acceptedAnswer”:{“@type”:”Answer”,”text”:” There are three sub camps in Monster Hunter rise.”}},{“@type”:”Question”,”name”:”How do you unlock the shrine ruins sub camp?”,”acceptedAnswer”:{“@type”:”Answer”,”text”:” To unlock the shrine ruins sub camp, you must complete the main quest “The Shrine of Secrets””}}]}

How do you get all the sub camps in MH rise?

How many sub camps are there in Monster Hunter rise?

There are three sub camps in Monster Hunter rise.

How do you unlock the shrine ruins sub camp?

To unlock the shrine ruins sub camp, you must complete the main quest “The Shrine of Secrets”